The penultimate episode of Dragon HouseSeason one makes one thing clear from its first image, an empty throne shrouded in shadow: the dying breath of a melancholy king is now as important a turning point in the Targaryen legacy as the Conquest of Aegon itself. . Might as well forget to mark time in Dragon with the letters AC, and replace it with AV: After Viserys.

That’s because Viserys’ warning about the Song of Ice and Fire – and Alicent’s alleged misunderstanding of this prophecy – has immediate and resounding consequences. As it opens, Episode 9 lingers on several tableaux that convey pain beyond mere melancholy: there’s a real sense of foreboding that floods the quiet little council room; the lonely flame-lit corridors; the piano playing as a young foot-headed boy announces the king’s death to Talia, the servant. Talia, in turn, informs Alicent, who seems genuinely distraught as she informs her father of Viserys’ dying wish. We know, of course, that the king’s little confusion is the ah! of the century. But Alice’s belief seems true. Of course, could it be helped by a healthy dose of confirmation bias? Maybe. But the tears in his eyes betray serious terror.

Together, Alicent and her father inform the small council that Viserys the Pacific has passed away that night. “But he left us a gift,” Otto adds, his voice suddenly clearing. “With his dying breath, he imposed on the queen his dying wish: that her son Aegon succeed him as Lord of the Seven Kingdoms.” The council is silent, immobilized, but just long enough for Jason Lannister to reveal that the council members have already been planning this exact turn of events – the usurpation of the Iron Throne. Alicent is furious that these schemes took place without her knowledge, but the good Lord Beesbury is even more angry. He accuses the council of treason, only for Ser Criston to silence him with a stone ball to the skull. (If we’ve ever questioned the Knight’s anger management skills, this episode serves as a reminder that therapy should be free in Westeros.)

Lord Commander of the Kingsguard Ser Harrold Westerling is also not pleased with this turn of events. While Alicent pleads for Rhaenyra’s life to be spared, Otto insists that her execution is the only way to ensure the kingdom’s stability. (Alas, that pesky kingdom is at fault again.) Ser Harrold remains skeptical and refuses to take orders from Otto until a king (or queen) is actually seated on the throne. Remember, he once served as Rhaenyra’s protector, back when she was known as Realm’s Delight; it would be folly to think that he has completely abandoned his affections. 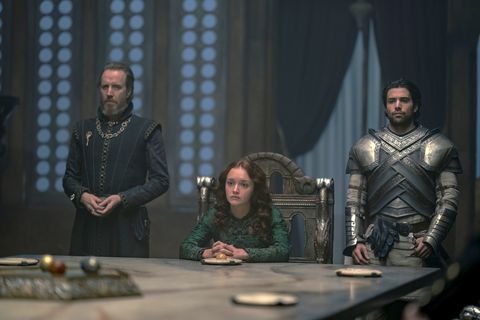 Alicent and the rest of the greens are forced to work quickly. She rushes through the castle to gather her children; if they previously had flashing neon targets on their backs, they have become much brighter. The only missing child, of course, is Aegon himself, and his sister-wife Helaena has no idea where her neglectful husband has fled. But she repeats her prophetic warning from the last episode: “There is a beast under the boards.” Viserys has always longed for a dragon dreamer in the family. It seems increasingly certain that his daughter is one of them.

Still, that doesn’t mean Helaena can magically guess Aegon’s location, and so the junior and senior Hightowers race to locate the former heir first. Otto employs the help of Ser Arryk and Ser Erryk Cargyll. (And you thought having multiple Aegons was confusing!) Alicent chooses to trust Ser Criston and her second son, Aemond, but only after imploring Criston with a particularly interesting turn of phrase. “Everything you feel for me,” she said, pausing before adding, “as a queen.” “I won’t disappoint you,” he replies, holding her gaze. Are these two…? I mean…?

Together, Criston and Aemond search Silk Street as Arryk and Erryk stake out a kid’s gladiator ring. Back at the Red Keep, Otto insists that the lords of Westeros bend the knee to King Aegon. Those who deny – or even hesitate – are quickly arrested. In the gladiatorial ring, the Cargyll twins encounter one of Aegon’s bastards (“one of many, I bet”) as well as one of the White Worm’s informants. The white worm, of course, is Daemon’s former lover, Mysaria, now King’s Landing’s secret keeper a la Lord Varys in game of thrones. She demands an end to the child-fighting at Flea Bottom in exchange for Aegon’s comings and goings.

And so Arryk and Erryk discover a disheveled Aegon huddled under a chapel brazier, only for Criston and Aemond to confront the trio outside the building. A clumsy little sword fight ensues – reenact Cargyll and Criston dashing down the stairs a few times if you want a good laugh – as Aemond captures Aegon and escorts him to his fate, whatever the hell. lack of “taste for duty” of the abandoned heir.

Meanwhile, in the Red Keep, Rhaenys is locked in her chambers while Alicent oversees the embalming of her late husband. The never-been queen bursts long enough to confront the former Lady Hightower, who expresses regret “for the lack of ceremony”. She begs Rhaenys to join her; whether Rhaenys thinks Viserys has changed his mind or not, the point remains: Aegon will be made king. “House Velaryon has long allied itself with Princess Rhaenyra, and what has that brought you?” Alicent applies. “Your dead daughter, alone in Pentos. Your son, cuckold. Rhaenyra’s heirs are not yours. She even invokes Corlys’ reckless pursuit for the throne, as he languishes from an injury we’ve yet to see on camera.

Finally, Alicent appeals to Rhaenys’ lust for power. “You should have been queen,” she whispers, and it seems, for a moment, that she could have won an act of incalculable diplomacy. “You are wiser than I thought,” Rhaenys replies, but with steel in her voice. “And yet you still toil in the service of men. You do not wish to be free but to make a window in the wall of your prison. A delicious and insightful line. Alicent never imagined, much less manifested, a reality outside the bounds of human machinations.

So when the queen confronts her father after Aegon’s safe return, it’s fascinating to discover that she resents Otto’s role in his current, tortured position. “Our hearts were never one,” she told him. “I see that now. On the contrary, I was a piece that you moved on the board. I wanted everything you made me want. 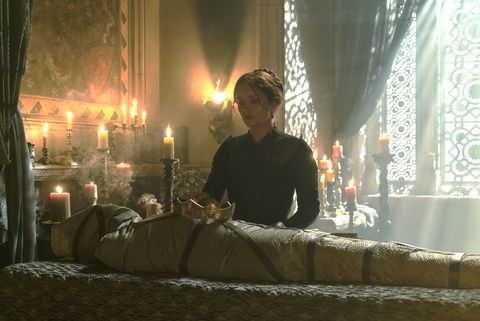 Otto warns that Rhaenyra cannot live; if she does, her allies will rally to her cause. “My husband would have liked this mercy to be granted to his daughter”, insists Alicent. Otto practically laughs. “Your husband?” he asks. “Or you, his daughter’s childhood friend?”

I stopped here to study Alicent’s face, wary of her reaction. This is one of the first times Rhaenyra and Alicent’s friendship has been mentioned by anyone other than the girls themselves, and it’s approached with an air of accusation, tinged with shame, as if a forbidden romance whose feelings still linger. Yet Alicent betrays no regrets.

Even as she escapes her father’s chambers, the queen must be humiliated even more tonight. She meets Larys, who teases information about how and why Otto learned of Aegon’s hideout before her. Alicent sits down, takes off her shoes, and Larys talks again about a network of spies operating for Otto’s benefit in the Red Keep. He stops and Alicent takes off her stockings, silent but seething. The clubfoot allows for another detail: one of the spies is Alicent’s handmaiden, Talia, a fact that many fans had already suspected, given the character’s inexplicable prominence in past episodes. They agree to get rid of her quietly, and Alicent puts her feet up as a reward, turning her face away as Larys masturbates. Dragon cheerfully employs graphic incest and childbirth scenes, but few things made my stomach turn like this moment between supposed allies.

But Episode 9 does not end on such a defeatist note. A particularly brave Cargyll, unable to “let this betrayal stand”, bursts into Rhaenys’ quarters and asks her to follow him, should she wish to escape the Red Keep unnoticed. Together they glide down the roads among the common people, only to be swept away by the crowds that gather before the king’s coronation ceremony. Alicent and Aegon enter the scene in a horse-drawn carriage, the latter being certain that his father never named him heir. “Don’t play with me, mother,” he says, as she insists he show Rhaenyra mercy when he is crowned king. He interrupts: “Do you love me?” Olivia Cooke’s reaction here is an instant classic, a delicious mix of disbelief, fury and affection. “You fool,” she replies.

Finally, Aegon is named heir in front of the crowds of King’s Landing. A murmur of disbelief is heard in the crowd as they process this unexpected news, but applause soon follows. They’re happy enough that the status quo continues: one man has always ruled the Iron Throne. As Aegon II receives the crown from Aegon the Conqueror, he raises his sword in the air with the bewildered joy of a child unaccustomed to adoration. Suddenly his power manifests and Aegon is instantly hooked.

His glory will not last. In a scene that nods to game of thronesIn the most famous (and infamous) episodes, such as “The Winds Of Winter” and “The Bells”, the ground separates from under the chapel and a dragon rises through the dust and debris. The Red Queen, Meleys, approaches King Aegon with Rhaenys on her back, menacing enough to prompt Alicent to sprint past her eldest son. But Meleys only intends to unleash a deafening roar, and the crimson dragon soars into the sky, taking with her the queen who never has – and some shreds of Aegon’s dignity. An epic moment to announce Dragonfinal, and essential: With this move on the board, we can officially consider the Dance of the Dragons begun.

Lauren Puckett-Pope is Associate Editor at ELLE, where she covers film, TV, books and fashion.